This week’s Roll Model is Sara Armstrong of Full Hands. Dottie and I have been following Sara’s blog since we first started writing our own, and her spirited accounts of life on two wheels with her husband and three sons in New Haven, Connecticut, are entertaining and inspiring. The Armstrongs are such dedicated cargo bike enthusiasts that they’ve even designed their own cargo-bike themed T-shirts (my favorite slogan: think inside the baks), and they recently participated in the Five Boro Bike Ride in New York City. Read on for Sara’s story in her own words.

Collecting the Christmas tree by bike

Describe your bicycling style in three words.
Style? Hard to describe anything about me as “style” as I am all about comfort, practicality and ease. Oh, that’s three words! Mama of three are my other three essential bike riding descriptors.

How long have you been riding a bike?
Outside of my suburban childhood bike jaunts, I did not ride much as adult until February 2009 when our first cargo bike, a Dutch bakfiets, joined our family. For the past three+ years, we have been committed family bicyclists and our bicycle stable has grown to include other cargo bikes: an Xtracycle Radish and a Yuba Mundo.

How does bicycling fit into and/or shape your life?
We ride. That’s just how we get around. Bicycling has enriched my family’s life immensely. On the practical side, it has allowed us to remain a one-car family. On the unexpected-benefits side, bicycling has made us much more in-touch, involved and aware community members. When out on our bikes, we notice so much more than we did when we were always in the car. We engage with more people, some of whom we likely would not have had much contact with if we were not bicycling throughout our city. We can stop easily when something catches our eye, investigate what suddenly interests us, and never need to worry about parking! Bicycling is fun and freeing. 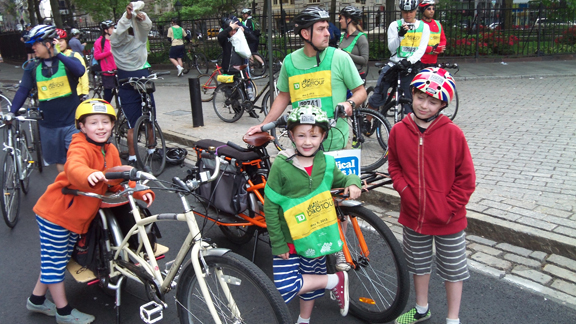 At the Five Boro ride

What inspires you to keep bicycling?
Much of the time, it is just as easy to bicycle locally than to drive, often more so. One point of inspiration is certainly my children. I like that they see bicycling as a valid, and even normal, form of transportation. Perhaps they will not grow up to be bicycle commuters themselves, but they will always know that a bike can take you where you need to go.

In your experience, does the general bicycling world—shops, outreach, group rides, etc.—feel welcoming for you as a woman?
I feel extremely lucky as the bicycling world here in New Haven has been very welcoming. Our local bike advocacy group, Elm City Cycling, has a number of very active women. Our local bike shop has a female bike mechanic. In fact this shop, The Devil’s Gear, has been incredible cheerleaders and champions of our family bicycling adventures. Even though I still cannot always talk the ‘technical’ bikey stuff, the folks there have treated me with respect and helped out whenever I needed it. And truthfully, our local bike shop is one of the few stores that it is easy to go into with three boys with me! The Devil’s Gear people put up with my guys’ high energy, innumerable questions, and unquenchable desire to test out every bike horn, numerous times. However, the truth is that I don’t attend Elm City Cycling meetings or most monthly Critical Mass Rides, but not because I don’t feel welcome as a woman. The timing of these events just does not work out with my life as a parent of younger children.

What is your take on the “gender gap” in cycling, including media attention on how to get more women to bicycle?
I honestly am not sure what to make of the gender gap. I do know a number of women who as mothers are responsible for much of their kids’ transport, getting them to school, activities, birthday parties, etc. Many of them cannot even begin to imagine that is doable by bike. Cargo bikes have allowed my family to do many of these same things, but I have three children and if my husband were not willing to be out there hauling the boys by bike too, and I had to be solely responsible for getting my sons to all the places they need to be, we would be in the car. Of course, this is more of a parenting issue than solely a gender one. Fathers who take on much of the activity/school running would face the same car vs. bike dilemma, especially with multiple children.

Biking to the first day of school

I hesitate to make any sort of statement about perceived dangers of bicycling and risk aversion and linking that to one gender or the other. My mom was an incredibly tough woman (seven children in 10 years!) and my five sisters are extremely strong and brave. I have, however, heard from multiple female friends that they would be more apt to bike commute if our city had bicycling infrastructure that made them feel more comfortable out there on their bikes instead of having to ride always on the streets with car traffic. I have no doubt though that there are men who feel the same.

If you could magically change one thing to improve bicycling in your city, what would it be?
While I am thankful for my city’s investment in painting sharrows on many local roads, I must admit that I do lust after those protected bike lanes that are in some other cities. Then I would feel more comfortable with my older sons riding for transportation, not just for recreation. My nine-year-olds are quite capable bicyclists, but our city’s infrastructure does not allow them to ride themselves easily to school as our route takes us right through downtown. We have been working on street riding on the weekends when the car traffic is lighter, but during the week we are still mostly hauling them on our cargo bikes.

And while I know this question asks for just “one thing,” I must mention that I would also magically like to change many drivers’ attitudes about driving a car. I would love to see all drivers recognize what a big deal it is to drive a car—that it is a primary activity that requires vigilance and concentration, not a secondary activity to talking on the phone, texting, doing one’s hair, whatever. This would improve all of our lives: drivers, pedestrians, and bicyclists alike. And to be clear, I, too, drive a car, so I try to live up to this standard.

Do you feel optimistic about the future of bicycling?
I do feel quite optimistic about the future of bicycling. In the past three years since we became family bike commuters, we’ve seen quite a noticeable increase in bike riding in New Haven and a very active family bicycling community grow on the Internet. The more of us out riding, I know it prompts others to think, “Hey, maybe I could do that, too.” We are no longer the nutty family out there on our cargo bikes (OK, maybe we still are) as there is a real cargo bike presence in town here. Sure, some folks still react in amazement and ask tons of questions when they see us hauling our kids on these cool bikes, but now we get hear more of, “Hey, nice Xtracycle!” or “Wow, you have a Yuba!”

Any advice for people, especially women, who want to start cycling?
Two basics for me: Find a bicycling buddy and start small.

When figuring out riding, reach out to another bicyclist. Perhaps you can go for a ride together before you strike out on your own or before you add kids to the mix if you are a family bicyclist. Maybe this bikey friend can help plan a good route to get to the library that doesn’t take you on streets too busy with auto traffic. Ask to try out another’s cargo bike. Ride together to camp or school drop-off.  Even if you cannot find a cyclist right down the street, go ahead and reach out to others via the web. When we first started family bike commuting, the folks we met through the Internet were invaluable. We asked their advice and looked to them for inspiration. We have found fellow bike folks, both local and virtual, to be extremely generous and open to our many questions.

To quote from the U.S. Secretary of Transportation’s blog, Fast Lanes,

“High gas prices are hitting American families in their wallets and pockets pretty hard these days.  But did you know that more than 40 percent of urban trips in the United States are less than two miles, yet 90 percent of those short trip are taken by car?”

Go ahead and plan to take a bike ride once a week to start. Think about one of those less-than-two-mile trips when you normally might take a car. Find a route on streets where you are comfortable riding. The more you are out there on your bike, the more you’ll feel comfortable doing on your bike. Likewise, the more bicyclists out there on the road, the safer it is for all.  So take that one trip to start. Make sure your gear is in good working order and you have all those provisions you need, kids’ snacks, sippy cups, etc. including a U-Lock (really, make this a part of your investment).  However, it doesn’t matter how long you ride for or how far you go, just give it a try.

Final words?
Just have fun! While many can point to the numerous benefits—financial, health-wise, environmental, etc.—of bicycling, when I am out there on my bike, I am often just having fun. Riding is a joyous experience.

{ Thanks Sara! For more on biking as a family of five, check out Full Hands. }
Tagged advice for women, biking with kids, Cargo bikes, roll models, women cyclists, Yubo Mundo