Big bicycling improvements are happening in Chicago!  I heard that the city recently installed a separated bike lane on Elston Avenue, so I went a little out of my way yesterday morning to check it out.

The  city calls the Elston bike lane “protected,” but as you can see below, plastic bollards do not provide any real protection from dump trucks. 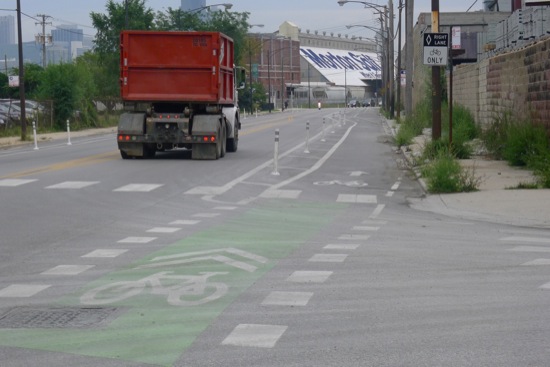 But I am not knocking the lane at all.  I love it!  Biking down this wide industrial road with fast traffic is now easy as pie.  Bikes have their own area and cars seem to respect it. 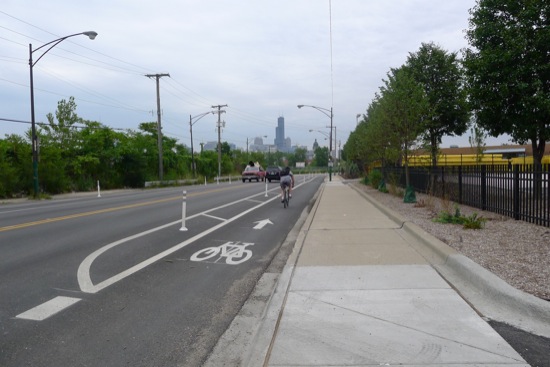 Intersections and parking lot entrances are marked with green paint to remind drivers to watch for bicyclists.  Some stretches of the lane have car parking to the left, providing real protection from moving traffic. 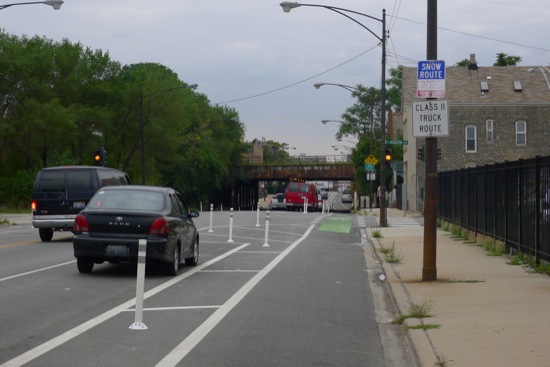 Look at that wide open lane with the Sears Tower beckoning – beautiful!

After a while, the separated lane ends and turns into a buffered lane, which is also new.  Although this design forces bicyclists to watch out for opening car doors and cars pulling out of parking spaces, there is a lot of breathing room that helps bicyclists feel more comfortable. 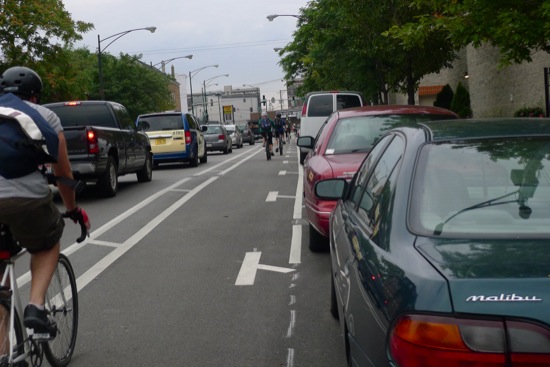 After Elson I turned onto Kinzie Street, which has the city’s very first separated bike lane installed in the spring.  I wrote about this beautifully designed and implemented lane earlier this year.

Finally, I turned on a side street for the last few blocks to my office.  This is the only street on the route that does not have a bike lane, but it does boast the beauty that is the underside of the L train tracks. 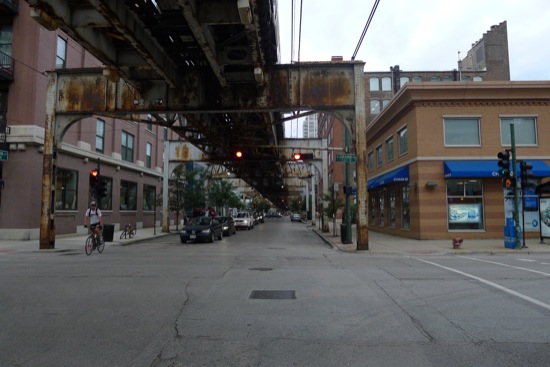 Biking my entire commute on mostly separated bike lanes was awesome.  I’m excited for the city to create more of these safer lanes.  Mayor Emanuel recently said, “By next year I believe the city of Chicago will lead the country in protected bike lanes and dedicated bike lanes and it will be the bike friendliest city in the country.”  Sounds good to me!  (That is how a big city mayor should talk, in contrast to Toronto’s horrible mayor.)

I think an abundance of separated lanes in a city would result in a massive increase of everyday cycling – don’t you?

If you agree, PLEASE sign this petition supporting protected bike lanes!  Right now there are 2,000 something signatures; we can double that number if we spread the word!

Video: Biking in a Protected Lane

A couple of weeks ago, I shared photos of my bike ride through Chicago’s first protected lane on Kinzie Avenue. I love this lane, so now I’m sharing the experience with all of you. Sorry for the jumpy video – the ride is more peaceful than it looks, but Chicago’s streets are bumpy and I was holding the camera in my hand.