Cerebral Palsy Has Nothing on This Biking Kid

Today I’m honored to share this guest post by my friend Samantha, who blogs at Ding Ding Let’s Ride!  (This originally appeared there.)  She was profiled here as a Roll Model earlier this year, where the focus was on her personal bicycling history and encouragement of other women to start biking.  This post is an in-depth look at the bicycling history of her adorable stepson. 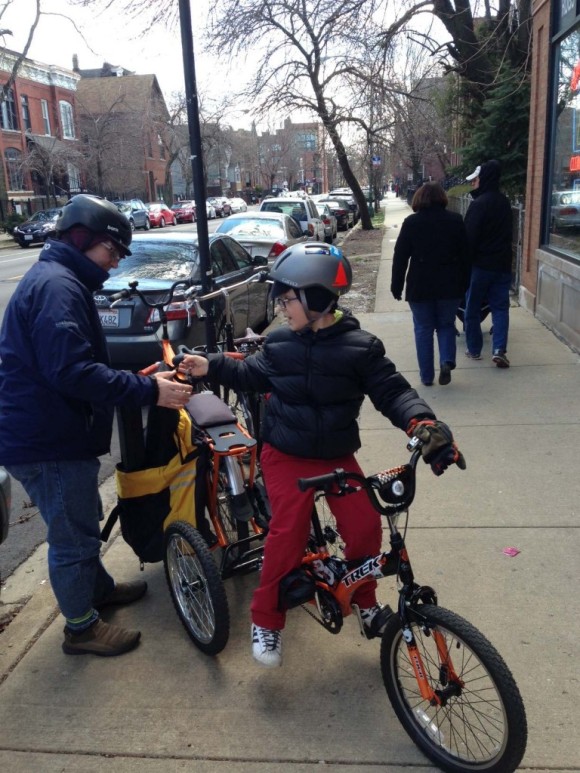 Besides writing about Dutch bikes and other city bikes, I also write about adaptive bikes for kids. We’ve gone through a number of bike variations over the last three to four years for my 8 year-old stepson, as he has grown and his abilities have changed. All the while we’ve tried to keep him on a bike that he can get on and off by himself and ride without our assistance.  His Cerebral Palsy has made that a bit of a challenge.

These days,  I don’t think twice about our family riding our bikes to meet up with the Kidical Mass families for a ride instead of driving there and unloading our bikes.  Actually though, it’s a big deal that he’s got the endurance and ability to ride those extra miles.   Thinking about that made me take a moment and look back over how far our young cyclist has come in the last few years.

We started with a Burley bike-trailer as he grew too big for a regular stroller.  His mom went with a special-needs stroller – they are a little bigger and heavier-duty than typical strollers. We thought we’d try using the  Burley bike trailer with a stroller attachment instead, though we certainly had to borrow the stroller once in a while.  When LD was  4 and 5, trips to places like the zoo or a museum could not happen without something for him to ride in like a stroller or the Burley.  He began walking much later than most kids do, and his legs and energy didn’t last that long either- a typical challenge with CP.  With the Burley, we could ride our bikes to the zoo, neighborhood festival, or park, lock up the bikes,  un-hitch the Burley, flip down the front stroller wheel, slide on the stroller handlebar, and be ready to go.   He could walk around and play, and then climb back in when he got tired.

The first bike we tried out with him was a regular kids tricycle –  a used red Radio Flyer even! But it didn’t work. He felt awkward, couldn’t really pedal, and almost fell off. We tried to entice him with a walk-bike, but he was almost too tall for one at that point, and it just wasn’t comfortable for him either.    Then, in 2010, his therapists presented him with a specially-adapted tricycle (as part of a program sponsored by The TelecomPioneers) That was a banner day.   He zoomed around the therapy room with it like nothing any of us had ever seen.  He was ecstatic and so were all his parents. 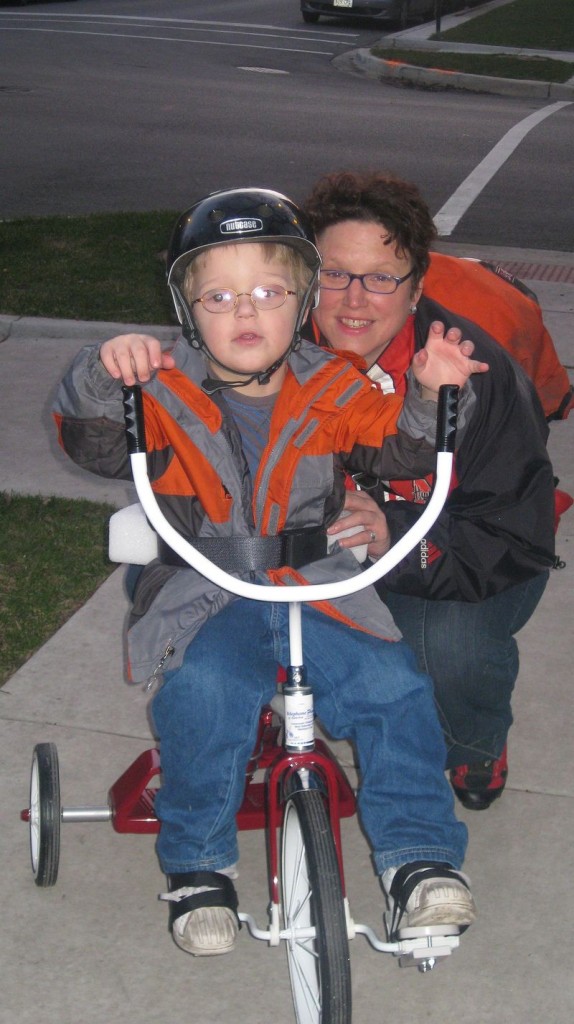 The trike really made us believe that he’d be able to ride a bike one day. We weren’t sure what kind of bike, but we knew there had to be one and that he’d be game for it.

It didn’t take too many months for him to overpower that first trike.  As he grew more confident in his ability, like any kid he only wanted to ride harder and faster.  We started our research, and you can find more pictures and details about the first bike we got for him in this post.  We thought we would get a trail-a-bike for him to ride behind Andrew – but realized he would most likely be constantly leaning to one side or the other.  Instead, we bought a standard kids bike, and had it adapted with a larger seat,  weighted flat pedals with foot straps, a hand brake, and an extra set of tires, larger than traditional ‘training wheel’s attached via a sturdy bracket.

This bike has been powerfully successful.  He became just another kid on a bike.  He was able to ride it around the block,  ride it on vacation with other kids and family members, and so on. Tentative at times, but still a kid riding a bike.

(Riding with my brother)

He took some spills, went through phases where he was too scared to ride much like many kids,  then got back on it again and took off.  Last spring though, he became really uncomfortable riding it as he had grown so tall that he was very top-heavy against the wobble of those extra wheels.   Which meant it was time to change up his bike again.  This time, we went with  a full trike-conversion kit, which you can read more about in this post.   He still rides the same bike frame, but now it’s been converted to the coolest, orangest-looking trike you’ve ever seen.

Both Andrew and I love the feeling we get when we’re out riding – for both of us, a bad day riding a bike is better than any other day not riding one.  We commute by bike and do as many of our errands and everyday trips by bike as possible.  We wanted to include the little guy in our rides and teach him how to ride so that he can share that great feeling and always have an independent means of transportation. Based on how much he loves to ride his bike these days, I think we’ve succeeded.  And most of the time I forget how far along he’s come from that first red trike.

If you want to catch a view of his trike in action, here’s  a video from a recent Chicago Kidical Mass ride (Jan 2013).  He pops up here and there the video, and again at the end of the ride.  I kept the video going for a bit as we rode on home with LD  in front of me, hamming it up, and riding along like a pro.

Thanks so much, Samantha!