Lest you think all we did on our trip to Amsterdam is visit bike shops and examine cycling infrastructure, let me assure you that we also did what we could to sample the culture, food and drink. Here’s what we got up to during our three nights and two-and-a-half days in the city.

We stayed in a houseboat on a canal—highly recommended. 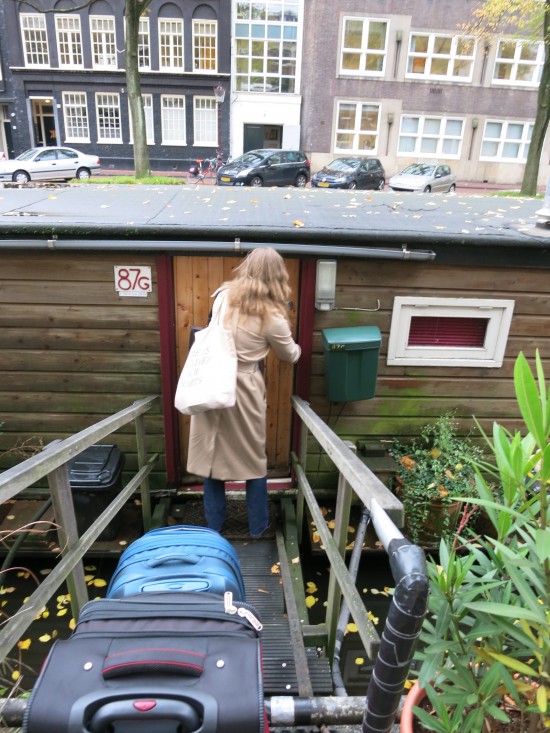 Dottie unlocks the door while our suitcases wait patiently to enter.

We discovered Little Bear on the Water thanks to Cup of Jo, and Anno was an incredible host. He even left us two Heinekens in the fridge.

Our first night in Amsterdam we were lucky enough to have dinner with locals—Malay takeout! The next day, we set off on our bikes to check out the Van Gogh Museum. Well, as close as we could get to the Van Gogh museum, which turned out to be the Hermitage Amsterdam since the real museum is being renovated. Since we were right there, we had to try to take a picture in the i amsterdam sign—with limited success (that’s us in the “m”!). 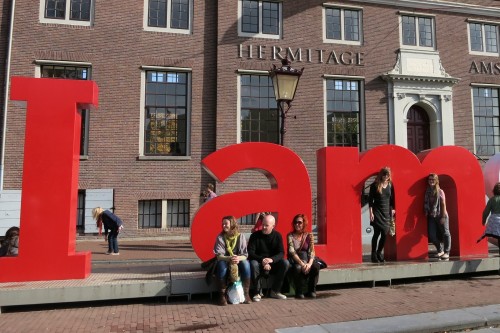 After admiring the exhibit (I thought it was interesting that Van Gogh and his brother corresponded in French!) we went to lunch at Gartine, a spot Dottie had uncovered during her Amsterdam research. It’s hard to pick a favorite meal on this trip (see below, plus we ate here in Paris!) but this lunch was definitely the best meal for the money that we had on our trip. We each had a delicious sandwich and shared a custard dessert.

After lunch, we got back on the bikes and struck out for Bols Genever, with an unscheduled stop at a book market that we just happened to pass through (love this aspect of traveling!). Dottie bought a vintage bike print.

The House of Bols museum was definitely a slick, commercial tour—still, it was a very nicely done and affordably priced one. We went on a Friday night, so the entry was just € 7,50—which included a cocktail and three tastes of Bols.  The perfect aperitif! We felt like we got an interesting glimpse into the history of this precursor to the gin we both love so much. :)

After our time at Bols, we pedaled through Vondelpark to our first dinner out in Amsterdam at Restaurant Blauw. We ordered the rice table, which was a first for both of us but definitely something we want to do again—nothing like having scads of tiny, delicious dishes spread out before you. 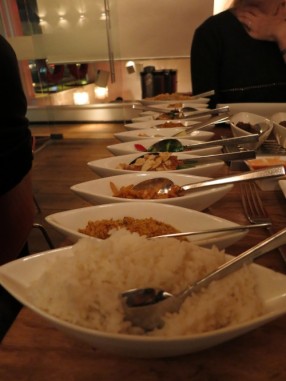 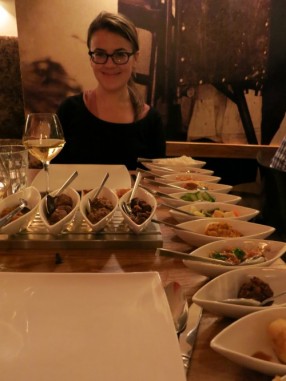 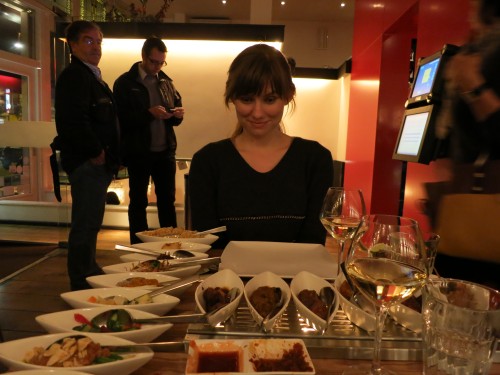 On Saturday morning, we took a ferry to Noord Amsterdam, which had a completely different, more bohemian feel to the rest of the city. Lots of street art. But BRRR it was cold on the ferry!

Me on the ferry to Amsterdam 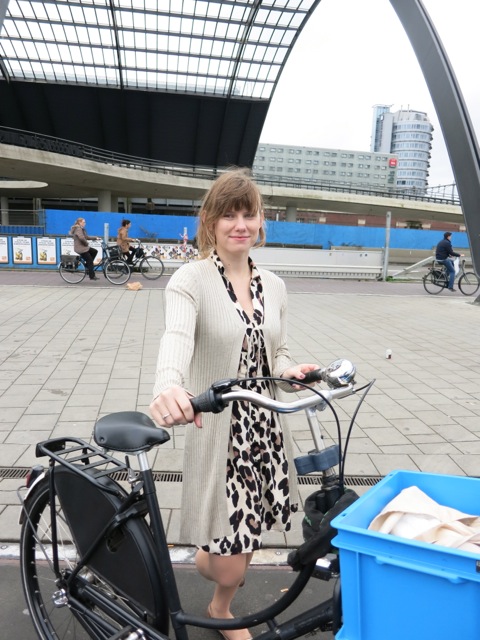 Dottie waiting for the ferry

Then, we returned the bikes to Henry at WorkCycles before hurrying back to our houseboat to meet my brother. Charlie had arranged for a stopover in Amsterdam on his way back from a work trip in Italy. After a brief cultural detour and a couple of drinks, we headed to dinner.

Me and my brother

We had dinner at a place called Marit’s, which was in a quiet neighborhood and was another of Dottie’s discoveries. Marit serves dinner a few times a week in her home—so it’s sort of a cross between a restaurant proper, and a supper club. The service was professional, but the atmosphere was homelike and cosy.

You know, like the sort of place where you might pause in the middle of the meal to pet a dog.

We walked home, intending to stop at the windmill brewery that Henry had recommended. Alas, it was closed, but we found a bar next door that would serve us their beer. It was quite good. I guess it’s a good thing to have something to look forward to on our next visit…

Our walk took us past the Vanmoof factory—we saw a handful of these in the wild on the trip.

Eventually, we returned to our houseboat and reflected on how lovely it is to bike and walk everywhere so easily in such a cozy, friendly city.

It was up early the next day to head to the airport. Amsterdam, we’ll be back!