This means I’m riding somewhere in the neighborhood of 50-60 miles per week. Since I once read somewhere that riding an equal number of miles per week as you will in your big ride means you’re in good enough shape to make it happen in a reasonable amount of time, I feel like we’re doing OK. If I’m wrong, well, I’m sure the Internet will chime in to let me know.

Anyway, last weekend our training ride was on the Natchez Trace. Since I’ve never been able to transport my bike comfortably by car before, this was my first time biking on the Trace. All I could think was, what took me so long??

One fun little quirk about going on long rides with me: I’m a total grump for the first 20 minutes. I start thinking about how we’re only 10 percent or whatever of the way in and that means we have to bike for TEN TIMES this long. I brood about the temperature and how much water I have with me and how much that hill we just went down is going to suck on the way back.

Then, somehow magically somewhere around mile 5, I am fine. I become accustomed to the heat and discomfort. I am resigned to the fact that I will be sweating for the next few hours and parts will be fun and parts will not be fun and I am totally OK with it going on as long as necessary. In other words, my Czech/Finnish peasant ancestry kicks in. Being built for endurance vs. speed isn’t a bad thing. 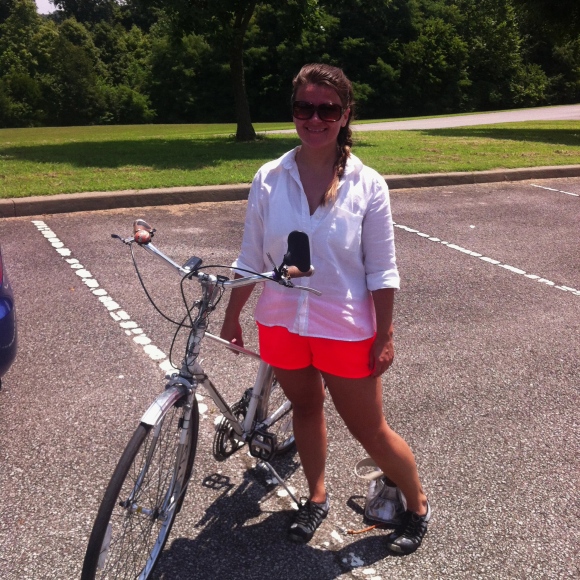 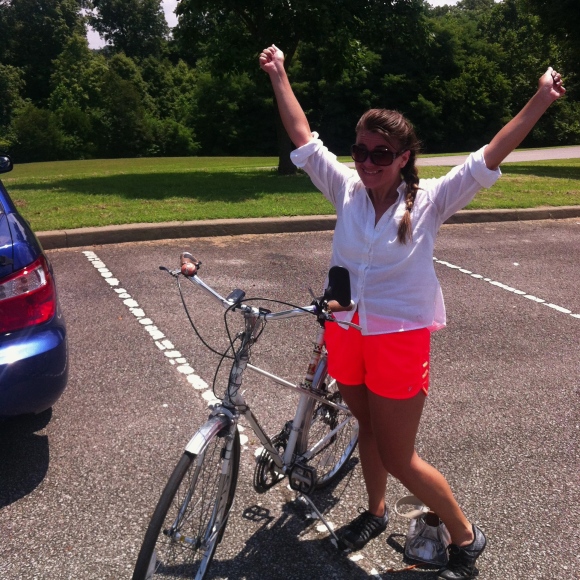 So after my typical rough beginning, I was all about the Trace. Even though it was late morning, we saw some wildlife! Namely a turkey, a turtle and a deer, which luckily did not decide to charge us. And…get excited…a dead skunk! Car traffic was very light and the drivers were courteous. There were tons of other cyclists; we saw at least two dozen.

Whitney and I actually considered blowing off work on Monday and going all 171 miles to Tupelo. Of course, that was while we were biking with a tailwind. When we turned around just over 10 miles in, our pace slowed since we had more uphills + a headwind to deal with.

We did stand out quite a bit from the other cyclists on the Trace. We were the only riders  who didn’t have drop bars and clip-ins. Near the end of one particularly long, steep incline, a male road cyclist came up beside us and greeted us with “Way to go, ladies!” I wasn’t sure what to expect (would he be down on us for not wearing helmets? Was this a drive-by pat on the head?) but he somehow managed to be encouraging without being patronizing. “I’ve seen people on $2000 equipment die on this hill,” he confided. Since we were able to keep him in sight for at least 10 minutes after he passed us, we considered ourselves pretty hardcore. “Think of what we could do with $2000 of equipment,” Whitney said.

So here’s what we did with our decidedly NOT $2000 bikes. (Not to mention that Le Peug only has five working speeds at the moment…I’ve got to get on that.)

I know, not exactly fleet foxes. But by the end of the month we can improve this time a bit—and I also think that, especially with the adrenaline of riding in a group, this is a pace we can maintain for 62 miles. We both still felt good after the ride, like we could have gone longer, and no soreness afterward. And the Clarksville Century course is legendarily easy.

And sometime in the next six months (spring or fall, probably!) I am taking a long weekend to ride the Natchez Trace. Anyone coming with me??

Bikes + cars at the Frist

Is biking to see an automotive exhibit the ultimate in cognitive dissonance? Don’t ask me; I was an English major. Anyway. Whitney and I did just that a couple of Thursdays ago, for the members-only preview of Sensuous Steel: Art Deco Automobiles.

I tried to wait out the woman in the background, but no dice.

Yes, we biked in these outfits.

On Sunday I had a little bike brunch with Whitney, a LGRAB reader who recently moved to Nashville. After a hearty meal at Fido, we decided to head to the Frist to catch the new Birth of Impressionism exhibit. (Funny story — my coworker was in Paris just after we were this Fall and went to the d’Orsay hoping to see the painting of Whistler’s mother. It wasn’t there—because it was on its way to Nashville.)

We got to the museum a few minutes before opening time, so we took a few photos.

The Frist used to be Nashville’s main post office, back in the 30s when the USPS was a source of national pride, and the building is an Art Deco masterpiece. Even the benches have those crisp, architectural edges.

It’s been a long time since I went on a bike ride with friends in my own city, and it felt great.

If you want to go on a group ride in Nashville — you’re in luck. I’m leading a Tweed Ride on Sunday, November 21. We’ll be meeting at 2 pm in Fannie Mae Dees (aka Dragon) park. More details about the route will come in a post of their own, tomorrow…