As part of the new LGRAB, every Tuesday we will profile an inspiring everyday cyclist—a weekly series called “Roll Models.”

This week’s Roll Model is Lauren T., who rides here in Nashville. If Lauren looks familiar to you, it’s because she’s been a loyal attendee of bike brunches and events here in Nashville since the very beginning (well, that, and she wrote a terrific guest review of the Lululemon crops).  The photos she chose here do a great job of illustrating her lively, adventurous personality and the fun she has riding her bike. Not shown: Her penchant for colorful language, apparently reserved for those of us who have the privilege of knowing her personally! Read on for Lauren’s take on the bike scene in Nashville.

How long have you been riding a bike?

I’ve been cycling for about 2 years. Of course, I had a bicycle when I was a kid, and I loved riding it everywhere, but I stopped when I got my driver’s license… and forgot everything. It is possible to forget how to ride a bike, I don’t care what anyone says! I had to re-learn in my back yard. I promptly rode straight into a bush and tipped over. Fortunately, it gets much easier after that :)

How does bicycling fit into and/or shape your life?

I do have a car, but I try to ride my bike at least a couple of times a week – for exercise, less gas consumption, a stress reliever, and also because it’s just fun. I only live about 5 miles from my office so this actually pretty feasible. A little less than a year ago, my truck died (like, needed a new engine died) during a long weekend… and I wasn’t nearly as bummed as I thought I would be, since I knew my bike would get me where I needed to go (and the public transit could pick up the slack!). I spent about a month getting around via bike and bus before I found a replacement truck… and the whole process was actually kind of fun! Not to mention I had the luxury of taking my sweet leisurely time in picking out something in my budget that wasn’t a piece of junk, instead of just grabbing the first deal that came my way. I’m not quite at the point where I’m willing to entirely give up my car, but I’m definitely heading in that direction!

What inspires you to keep bicycling?

As dorky as it sounds, the wonderful feeling I get from cycling is what keeps me going. I love the feeling of freedom, of propelling myself with the strength of my own two legs. And, you know, it feels pretty dang good to roll up at some giant festival downtown & lock my bike to the nearest rack – instead of paying $15 to park my car (and get stuck in traffic crawls when all is said and done!).

In your experience, does the general bicycling world—shops, outreach, group rides, etc.—feel welcoming for you as a woman?

In my city – absolutely! I think this city & all the little bike gangs around do their best to make sure everyone is included – both women and men. I’ve never felt stupid or looked down on for wandering into a bike shop & asking dumb questions. My commute has lots of interactions with male cyclists – the kind who are head to toe in colorful spandex on top of a really expensive bike – and we all chat each other up & offer words of encouragement. I may be rolling around on a spray painted Frankenbike, but I’ve never felt like I was inferior because of that, or because I am a lady cyclist. 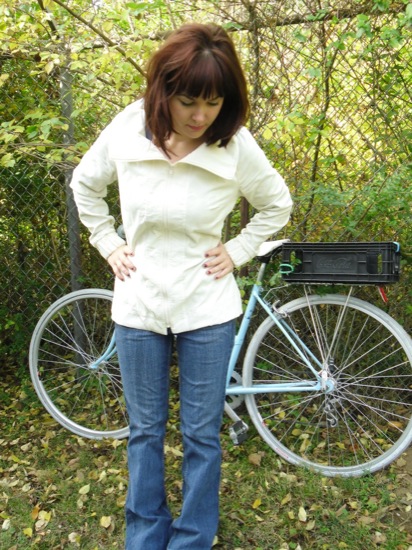 Lauren in a cycling jacket she sewed

What is your take on the “gender gap” in cycling, including media attention on how to get more women to bicycle?

I don’t see much of a gender gap – maybe I’m just oblivious to it. Wouldn’t be the first time!

If you could magically change one thing to improve bicycling in your city, what would it be?

I think the single most important thing we need here is education – lots and lots of education. Education for drivers, cyclists, and pedestrians. We all need to learn how to share the roads – they are there for all vehicles, not just ones that use gasoline :) I’d say that the majority of my problems from cycling around in the city are from driver ignorance — whether they are passing too close because they don’t know better, or maybe they didn’t know they couldn’t park in the bike lane, and even a lot of the road rage toward cyclists. Nope, me cycling in the street is not illegal, sorry!

Lauren at the Tour de Fat

Do you feel optimistic about the future of bicycling?

Oh, yes! I really do think we are heading toward a more sustainable lifestyle – and bicycling is definitely a big part of that. Seeing all the progress that my city is pushing toward pedestrians & cyclists absolutely makes me feel optimistic about the future.

Any advice for people, especially women, who want to start cycling?

Starting out can be intimidating & scary, but it will get easier the more you ride! You don’t need something overly fancy/expensive to start, just make sure you have the seat at the right height & that you feel comfortable on your bike. I started out by riding in circles around my block (and tipping over every single time I tried to turn the bike, haha), and then working up to tiny ½ – 1 mile rides down the road – until I was at the point where I could comfortably ride all the way to my office. I was very timid when I started – I wouldn’t even bike around my neighborhood solo, too scared! – but now I’m kind of fearless. I’ll bike anywhere, for any distance, and I’ll even do it in a skirt! Yeah!

Thanks Lauren! For more about Lauren, visit her sewing blog, Lladybird, and be wowed by her stitchery talent. She’s currently helping me sew a skirt.  In the three months I’ve been working on it off and on with her, she’s completed approximately a dozen outfits.

So for the past month, after the car accident I mentioned in my last post, I’ve been car-free here in Nashville.

Living in a city that makes only the barest of nods to public transportation, I’d always assumed that being without a car would be a terrible hardship, even though I already rely on my bicycle for most neighborhood trips. Some of my fears turned out to be true and others, not as much. Here’s how a few of my preconceptions ended up playing out in reality.

I’d be limited on what I could do and where I could go.
True, but not to the extent that I had feared. I was able to bum a ride to events that were really important, or take a bus. I also tried out the bike/bus combo for the first time—overcoming my fear that my bike would fall off the rack at the front—and was amazed at how easy it was. That said, with an increased awareness of the energy and time expenditures to get somewhere, I found myself choosing to spend time (and money) in my own neighborhood more often.

My social life would suffer.
The past month has been quieter for me—but having to get most everywhere by bike has made me respect my human limitations and not push myself to do things when I feel sick or tired like I usually do. Surprisingly, being forced to slow down has been more relaxing than frustrating.

I’d be unable to see out-of-town family and friends.
Sadly, true—I missed out on seeing some good friends of mine a couple of weekends ago. (The Greyhound to my hometown takes about 7 hours, vs. 4 hours in the car, which means that taking it for a weekend is impractical. Rental cars are pretty pricey for a weekend.) This continues to be one of the biggest reasons for me to keep a car.

I won’t be able to do everyday things—shop for groceries, etc.
Again, sort of true. My local grocery is close but has crap (aka zero) bike parking, so it’s kind of a pain. I have tagged along with friends to the store a couple of times, which was nice when it came to buying milk, etc. I also found myself buying things at odd places that were for whatever reason more convenient (I’ve never bought milk at Walgreens before! Or butter from the Dollar General.). Random shopping trips just didn’t happen. I would say that was a good thing since I saved some money, but I’m pretty sure I made up for it by buying stuff online. There were some errands I put off while I didn’t have a car, like going to the bank, but then again I do that anyway.

More to come on the response from others, and my own feelings about the experience, but this post is getting pretty long. I know there are others in mid-sized cities, and others here in Nashville, who don’t drive. What has your experience been like? What were your fears about being without a car and how did you deal with them?

Bicycle Picnic in the City

On Monday (hooray for holiday weekends) I rode a few miles, set up my blanket under a big tree by the lake, laid out my spread of fizzy drink and fresh berries, and read a novel for a couple of hours. Although the local news warned that because of the 90 degree temps everyone should stay in the air conditioning (sigh) the day was beautiful in the shade with the legendary Chicago wind keeping things cool.

The gorgeous location, so private and quiet, was amazing for a city as big as Chicago. The city has so many lovely spots for those who put forth the small effort to find them.

This is going down as an event for the Summer Games, go on a picnic by bicycle. Bicycle picnic was the first event I came up with when Trisha and I started planning the Games. I’m excited that it’s finally come around and I hope others take the opportunity to have a bicycle picnic of their own :)

For the last few weeks you may have noticed me riding Le Peug more often.

But I like to be fair (I was the kind of child who worried about stuffed animals being lonely if they didn’t sleep with me every night, which is why I only ever had one), so for the past couple of weeks it’s been the Bat’s turn.

The minute my butt hit the seat, I thought, no wonder I brought this bike back from the UK. Smooth, stylish, sturdy, easy to shift, built-in lights and zero maintenance. Why would I want to ride something else? Why have two bikes, again?

Funny thing is, I know I’ll feel the same way the next time I get back on Le Peug. Light, nimble, sporty and fast. Why would I want to ride something else? Why have two bikes, again?

Anyone else have trouble picking a favorite bike?