A New Kind of Bike Rental

Yesterday morning on Cup of Jo, I read about a totally new kind of bike rental/bike share system, Spinlister, described as airbnb for bicycles.  The idea is to rent a bike from an individual, paying substantially lower rates than you would at a traditional bike rental company.  The site is currently live for NYC and San Fran.

The best thing about this system is the available selection of unique bicycles, much better than the usual crappy hybrids offered by bike rental shops.  A quick look at the site shows a fun collection of bikes, including the ones below.

I think this is a cool idea with a lot of potential, although arranging to meet up with an individual to pick up a bike may be too much trouble for a one-day rental.

Would you consider using this system while visiting another city?  Would you offer your bike up for rental???  I don’t think I would be willing to hand over my bikes to complete strangers.

{Check out our past interview with Joanna of Cup of Jo!}

Have you all caught the trailer for Premium Rush yet? (It’s a bonus they throw in when you go see Magic Mike. So I hear. Ahem.)

The shots from the cyclist’s perspective are incredible, and Manhattan looks stunning as always. I’m not usually an action movie person, but bikes + Joseph Gordon-Levitt = I’m going to have to catch this one when it comes out later this month!

Happy Monday! How was your weekend – bike much? I rode my bike a lot, as a means of getting from place to place. In my party shoes!

Often there are a lot of stories that catch my attention but I never get around to blogging. Usually, I share these through the LGRAB Twitter account. I think every Monday we’ll share some of these together in one post. Does that sound good? I have a lot of bits to share this morning. I would put in even more, but I have to get to work!

I found this video from a blog post on BicycleDutch demonstrating how the city of Utrecht set up a construction detour for bicyclists.  Makes me sad for Chicago and North America in general that Utrecht’s detours are 1000x better than our permanent bike infrastructure, but mostly I was mesmerized by the huge flow of people riding bikes.  Chicago’s been talking a lot about building an infrastructure to service cyclists “from 8 to 80” – fully separated and protected paths is the (only?) way to get there, as this video demonstrates.

Contrast with this scene of one of Chicago’s most popular bikeways leading up to one of the very few protected bike lanes, where cyclists are forced to ride amid car traffic and merge left under a dark bridge. Simply seeing the type of bicyclist featured here – almost all young males on fast bikes – is telling. You can read more about this section at Grid Chicago.

Also on Grid, a great write-up on the class I taught last week for the Chainlink’s Biking Semester. (Thanks for stopping by, John!)

Fun news last week – the USPS has released a new forever stamp series of bicyclists. The copy is all about the health benefits of cycling, such as “reduces obesity” and “improves muscle tone.” The bicyclist who most resembles me is the little girl on her tricycle. Found via Cyclelicious.

This is Bike to Work Week in Chicago. I’ll be interested to see if there are more bicyclists than usual. Here’s a little video that beloved local brewer Goose Island put together to promote a PSA contest in connection with bike week. There’s great Chicago bike scenery that shows what a lot of my rides look like.

I noticed that Anthropologie is selling bikes on its website in the Hobbies & Leisure section (love that!) – and not any bikes, but the beautiful Abici Sveltina Donna and the Bowery Lane Breukelen. Interesting! I like the idea of bikes being integrated into the regular lifestyle shopping experience, especially to catch the eye of someone who would not normally venture into a bike shop. But I wonder how many of these they actually sell?

What bike stories are on your mind this week?

Check out this amazing video of a Montreal man who tries to do everything you might do in the course of a normal day on his bike.  Showering! eating eggs! nothing is too crazy. I am in awe. Happy Friday! [Via]

THE MAN WHO LIVED ON HIS BIKE from Guillaume Blanchet on Vimeo.

Check it out! We put together a little guest post on favorite blog {frolic!}, featuring Trisha and her Kate Spade Adeline Abici.  The message?  Bike + Be Happy!

Thanks to Chelsea Fuss for inviting us over!

Go ahead, ask us anything*

Just a quick note to say we’ve joined Formspring as a fun and easy way to generate a FAQ. What’s Dottie’s favorite camera? Why did Trisha go to England for her Batavus? How did we get started with cycling? Where did we get that mirror/helmet/skirt? How many cats do we have, anyway? Now’s your chance to ask, either on our page or through the form we’ve added to the right-hand sidebar. If you follow us on Twitter, you’ll see the questions as we answer them, but we’ll post periodic updates here as well.

*the best thing about Formspring? Only the questions we choose to answer will be displayed on the page.

Confession: Internet shopping is one of my favorite pastimes. I know it’s not right, but somehow filling a virtual shopping cart with crap I don’t need and then closing the window at the last moment, without checking out, is just as therapeutic as actually making the purchase.

Know what else is therapeutic? Passing the finds on to someone else. In that spirit, and because it is the season of gift-giving, we will be sharing some of our favorite bikey finds with you over the next few Saturdays. First up are some items from one of the places I find near impossible to resist: Etsy.com. If you haven’t heard, Etsy is a fabulous online marketplace where people (like  our friends at cyclemumbreeze!) sell handmade or vintage goods. All of these unique gifts are under $50, by the way. 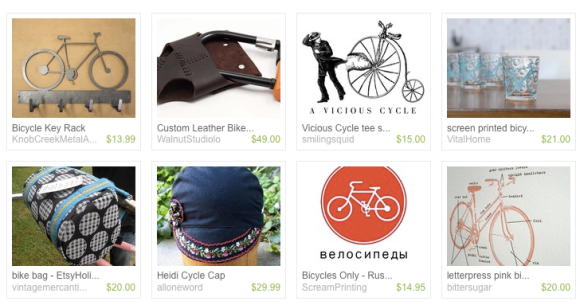 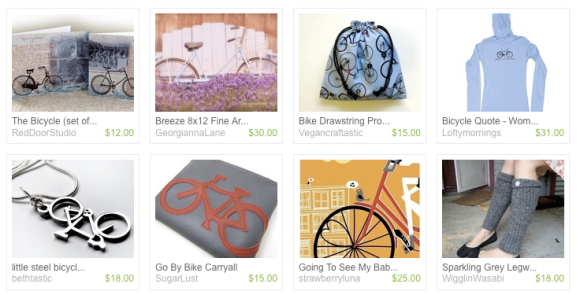 Love all of these, but my favorite has to be the Vicious Cycle t-shirt. It’s just so very punny.

(p.s. Etsy mini-gallery inspired by the oh-so-tempting collections of Miss Nightingale at Beyond the Pale.)

What a Difference 100 Years Makes

I was intrigued by these photos of a Nashville intersection on Shorpy.com. 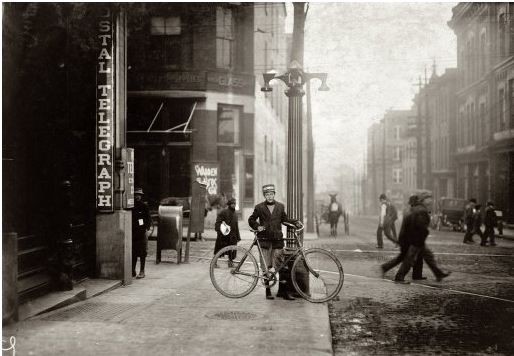 Original caption: "George Christopher, Postal Telegraph messenger #7, fourteen years old. Been at it over three years. Does not work nights."

Glad to hear you don’t work nights at 14, George! I totally covet your bike. Maybe it’s just the white tires but it reminds me of either the Batavus Fryslan, or the bike I would be riding if I were a man: the Pashley Guv’nor. The days of bike messengers aren’t completely gone for Nashville, but the streets definitely don’t look the same:

END_OF_DOCUMENT_TOKEN_TO_BE_REPLACED

We may never know how many licks it takes to get to the center of a Tootsie Roll pop, but the folks at Gizmodo have posted a picture that shows how many Brompton folding bikes can fit into one parking spot. I won’t give the answer away here, so click over to find out and see the photo. It’s pretty amazing.

Today Elisa of Bike Skirt linked to an interesting article on cyclists and traffic laws. Should they always be obeyed to the letter? Check out the post and add your opinion to the comments (I shared mine).

And if you’re in Nashville and are interested in making our city more walkable and bike-friendly, take this survey and share your opinions with the planning commission.

Check out this very cool project, the Thought You Knew Calendar, featuring Chicago women and their bikes. The proceeds benefit the Chicago Women’s Health Center (of Our Bodies, Ourselves fame).

If you’re in Chicago, check out the Bike Winter Art Show, running February 13-27.

Today Elisa of Bike Skirt linked to an interesting article on cyclists and traffic laws. Should they always be obeyed to the letter? Check out the post and add your opinion to the comments (I shared mine).

And if you’re in Nashville and are interested in making our city more walkable and bike-friendly, take this survey and share your opinions with the planning commission.

Check out this very cool project, the Thought You Knew Calendar, featuring Chicago women and their bikes. The proceeds benefit the Chicago Women’s Health Center (of Our Bodies, Ourselves fame).

If you’re in Chicago, check out the Bike Winter Art Show, running February 13-27.