When I visited Copenhagen Cyclery this weekend, I also test rode the Velorbis Mobii Trike. Yay, trike! I’ve been wanting to test ride a three-wheeled beast for some time now. When I wrote about the WorkCycles Bakfiets a couple of months ago, I mentioned that I could not know for sure how I felt about it without riding a trike for comparison.

The Mobii (love the name!) comes in one size and two powder-coated colors: orange and gray. Designed and handmade in Denmark, this thoroughly modern, steel-framed stunner has the power to erase whatever old-fashioned connotations the word “tricycle” has. 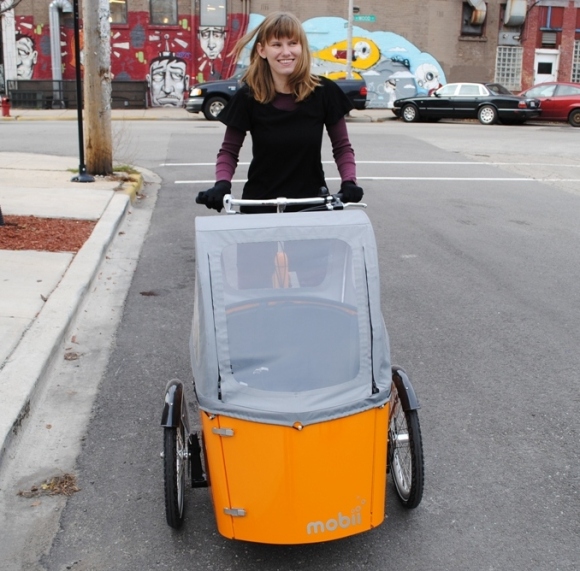 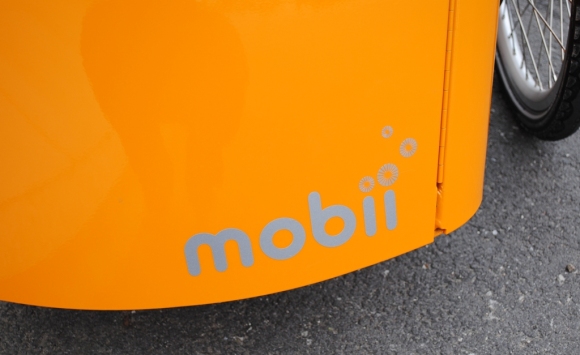 Riding the Mobii with regular clothes and shoes is as effortless as riding in a car. The trike is equipped with all of the classic city bike features that make it so easy to get on and go: chainguard, fenders, wheel lock, plush sprung saddle and no-slip pedals. Unfortunately, a major benefit is missing: lights. Generator lights are so important on a bike like this. The omission is a head-scratching misstep.

Changing gears is simple and hills less daunting with the SRAM 5-speed internal hub. The weather-protected and doubled-up roller brakes and coaster brakes remove all worries of stopping power, no matter how heavy the load.

Someone remarked that the bakfiets is a cargo bike that can carry kids, and the trike is a kid bike that can carry cargo. I agree with that, as the Mobii is designed with passengers’ comfort in mind. The trike has a large box on the front rated to carry 220 pounds, equipped with a plush bench seat and two safety belts. There is ample room for two small children and several bags or boxes of additional cargo. The weather cover can be unzipped and removed. The front door unlatches and opens so little ones can easily climb in and out. 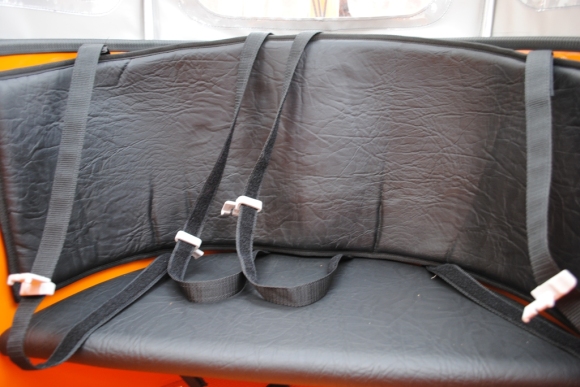 Of course, a cycle with two front wheels is not as maneuverable as a regular bicycle. This problem is ameliorated on the Mobii: the two front wheels and the box turn separately from the rest of the bike, making cornering a bit easier.

Although made for stability, the trike is not so stable if you ride it like a regular bike. I got a quick reminder of this when the front left wheel popped off the ground as I rode up the small sidewalk ramp. Yikes! I felt a bit topsy-turvey when turning in general, but nothing as dramatic as the wheelie.

As with the Velorbis Studine, the Mobii’s seat tube angle is steep compared to a bike like the Workcycles Bakfiets. This means my body is positioned somewhat straight up from top to bottom, as the pictures show. This was not an issue for me. Although I felt perched differently than on the Bakfiets or my Dutch city bike, I felt pretty much the same pedaling.

The geometry issue for me is the reach to the handlebars, which I felt was quite long. As a result, I had to lean forward a bit and keep my arms straight. The bars can be raised, but cannot be moved any closer to me. I would prefer swept-back bars that come to me, instead of me going to them. Then again, I may be the only person on earth who feels stooped over on this bike ;)

The trike is totally stable while stopped, making it unnecessary to put a foot down for balance. A kickstand is likewise unnecessary. This is the major benefit of the bike. The equivalent of my “wheelie” moment with the bakfiets was when the bakfiets nearly fell over on me when I tried to push it up closer to the bike rack. That would not happen with the trike. 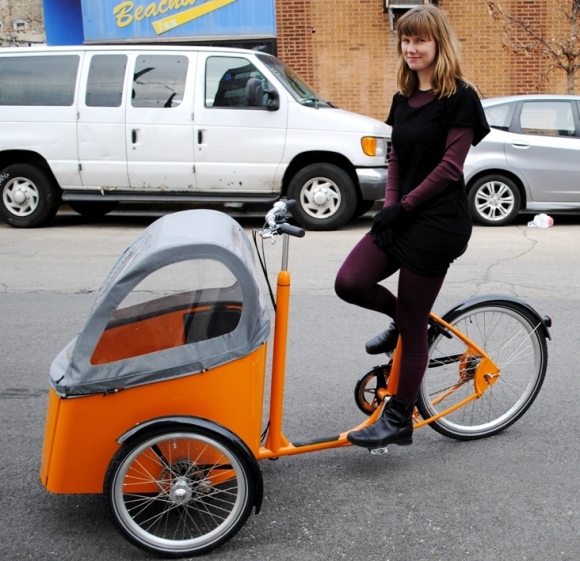 Here is the Mobii in gray. Now I want a disco ball for my bikes! 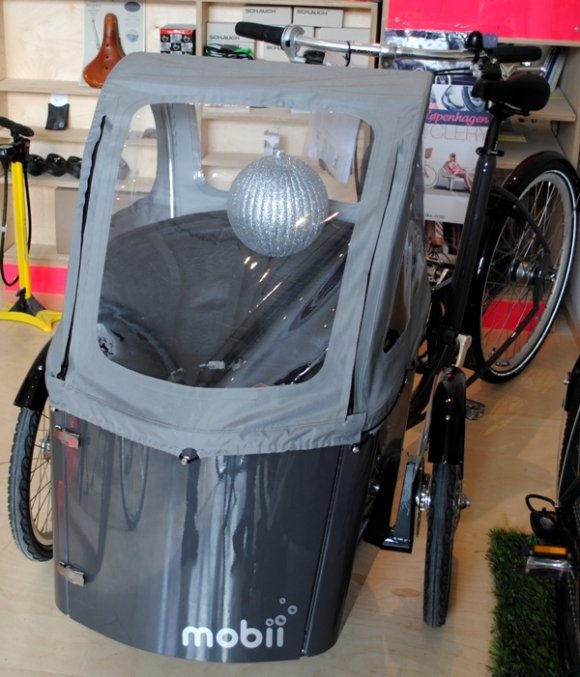 Whether one prefers a two-wheeled bakfiets or a trike is a personal decision.

My conclusion is that people who are somewhat wary of bikes and worry about perceived stability may favor the trike. On the Mobii I was perfectly balanced while stopped, even with no foot on the ground. I could walk the trike effortlessly without worrying about it tipping on me. Loading and unloading precious cargo would be a snap, with no need to set up a kickstand.

On the other hand, people who are one with their bicycles and worry more about speed and maneuverability may favor the two-wheeled bakfiets. The Mobii is not as fast or efficient as the bakfiets. For someone used to riding a regular bicycle, the Mobii handling sometimes could be awkward and frustrating.

I fall into the second category: I am much more comfortable on two wheels than three. With my imaginary child, I could see myself riding the trike to daycare, dropping off the kid, and then pulling a regular bicycle out of the hedges for the additional five mile ride to work. In a different imaginary-world-scenario, I could more easily see myself riding a bakfiets the whole way. That said, riding either type of cycle would become second nature once I invested in it and made it a part of my life. What seems awkward on the first ride becomes normal over time. 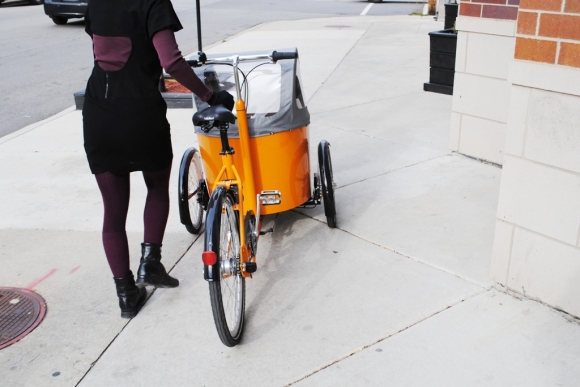 At $3,895 the Mobii is not child’s play, but for someone serious about transportation cycling with children, a trike is definitely worth looking into. I’m sure I don’t have to talk about the savings and benefits compared to a car, van or suv. ;)

I know some of you out there have trikes (MamaVee and others) – I’d love to hear your thoughts on the subject.