Featuring: Martha and Her New Oma

Fellow Chicagoan Martha (chibikegal) commented that “after stumbling onto your lovely blog, I was motivated to re-start my search for a beautiful bike.” Soon she purchased a shiny new Azor Oma made by Workcycles, the same as mine. She very kindly responded to my request for pictures and her cycling story. Read on for the goods, including a bike-themed wedding cake, $10 train station bikes, and a glimpse of Henry of Workcycles as a high school student.

Martha and Her New Oma

I started exploring by bicycle probably around the time I inherited a red tricycle from my older brother circa 1970.  After spending my teenage years on a 10-speed schwinn, and my 20’s on a Specialized Rockhopper (SO cool in 1989) I really bumped up my bicycle exploration in 1995 when I moved to Chicago – a big flat city where I knew almost no one.  I did meet a few people over the next few years, and in 2005 I married my favorite cycling companion, Dean, celebrating with a cake decorated to look like the Chicago skyline, with two bicycles riding across it (followed by an old VW, but that is stuff for a different blog).   Our favorite dates still involve riding to some food-themed destination – Chinatown, various ice cream shops and bakeries, or shopping for spices and curry leaves up on Devon. 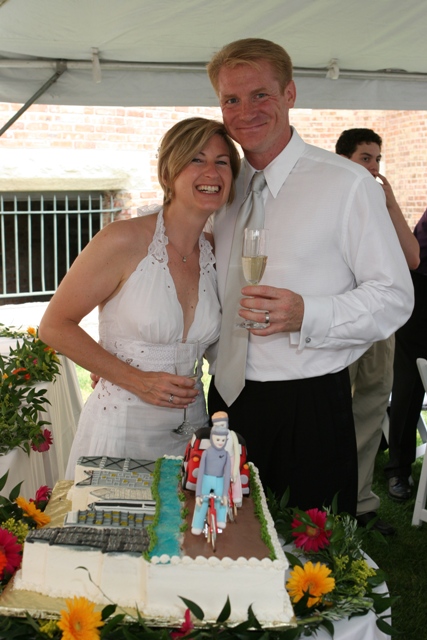 On a normal day though, since my office is in the suburbs, my commute since about 2004 has consisted of a short ride down Leavitt to Hubbard on my “train station bike” to the Western Ave Metra.  On a mundane note, the great thing about riding to the train station, is that (unlike walking) I can wear any shoes … no changing into flats.  Or wearing running shoes with a suit and pantyhose, like I did as a government employee just out of law school, thankfully before digital cameras existed.  Thunder or snow storms can be a drag – hence the need for a bike that can be abandoned at a train station if you get a ride with someone (I gave my mom, an avid garage-sale shopper, a $10 budget, and it took her about a day to find one).  Now that my office has moved up past Lake Forest though, I need to shop for a foldable bike, as I often end up at a different station from the one I left.  Ah well.

My latest bike, however, is particularly special.  I wasn’t able to ride much at all from about October of 2007, until this summer (2009).  In short, I had two herniated discs and bone spurs removed from my cervical spine, the deterioration likely the result of whiplash I got when a limousine rear-ended my Subaru in 1994 (yup, so much for that feeling of safety I used to have riding in a car).  With my new titanium neck, riding any way but straight up is not an option for more than about ten minutes.  I tried several bikes this summer, but last week finally bought an Oma I can practically lean back on, breathing a sigh of relief.  I admit I knew about the Oma because I’d run into Henry (Workcycles) at our 20th high school reunion, and later, Dean and I stopped by in Amsterdam to try some of the bikes.  So, it’s worked out well for many of us that Henry survived high school, we were a little worried about him on that crazy old Raleigh on those dark leafy streets…

So at this point, the only things I can see that would keep me from riding are snow piles in the bike lanes, and heavy rain.  It’s good to be back.

Thanks so much to Martha for sharing her beautiful pictures and story with us! Hopefully I’ll see her around the bike lanes – I surely would notice a big, black oma.

19 thoughts on “Featuring: Martha and Her New Oma”