20 Comments
By Trisha our bikes, the Bat, travel

There is a beautiful bike in my living room today and it’s all due to my fabulous parents.

You may recall my riding the Batavus in England and then heading off to Russia. Since I wasn’t going back via the UK, there was no way I could bring the bike home myself. Luckily, my brother and I had bought tickets for my parents to visit Prague and London last fall, for their upcoming 30th anniversary — and they generously offered to take the bike back for me. I arranged to have it delivered to their hotel, and they would simply take it to the airport on a shuttle, check it, and take it to Alabama. Easy peasy? Not so much, when you’re talking about a fully assembled Dutch Bike. Anyone who thinks they might be traveling with a bike in future, read on!

Mom and Dad decided to take the bike from the box and transport it in the cardboard sleeve, since the box was so unwieldy.

A Batavus packed in a cardboard sleeve for transport.

When they came rolling up to the check-in counter, the United Airlines people at Heathrow looked at them like they were aliens. The woman at the counter asked my dad what she was supposed to do with it…he said, “Well, I was hoping you’d put it on the plane.” They made them deflate the tires because they were worried they’d explode. Luckily, they were too taken aback to realize they could have charged $200 for transporting the bike. Score one for my budget!

But Mom and Dad’s trials weren’t over: When they got to security at Dulles they had to reclaim the bike (along with all their other checked baggage) and recheck it for their flight to Atlanta. As they strolled nonchalantly through the “nothing to declare” aisle at customs, the officials gave a questioning look but didn’t comment (since you are allowed to bring $800 worth of goods back with you from overseas without paying customs, they weren’t actually doing anything wrong). Enter another set of flummoxed airport employees. (My mom, when telling the story: “Hon, I don’t think many people travel with bikes.”) Of course, it wouldn’t fit through the scanning device they put suitcases through. They tried shoving it in and eventually swabbed it down with cotton and then tested the swabs for explosives or something. Note to Al-Qaida, bikes as terrorist instruments will not be tolerated!

Once my parents and the bike arrived in Atlanta, they had to get it on the shuttle to the parking area. Let’s just say the Parking Spot shuttle driver and passengers hadn’t seen anyone traveling with a bike, either. It was the topic of much conversation (“That must be one special bike! What kind of bike is that?” etc.), especially when the shuttle stopped to drop off my parents in front of my mom’s white Mustang. Dad, who had been regaling the passengers with the story of the bike’s trip so far, looked at them and said “Now, for my next trick, I will fit this bike into the trunk of that Mustang,” while having no clue whether or not it was actually going to happen. Being a master of packing, he did it (luckily the rear seats fold down to access the trunk)! He said they rode with their knees in the dash all the way to Anniston.

And now I have a beautiful bike in my living room! Thanks Mom and Dad. We’re off on our first (American) ride. :) 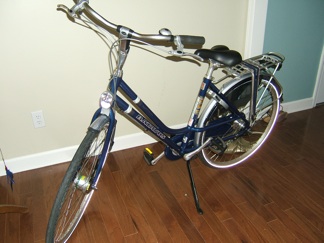 20 thoughts on “Bringing the Batavus Home”