So, the St. Petersburg cycling scene was quite different from the London one Dottie wrote about last week. Though we spotted more bikes than we expected to see in a city that doesn’t exactly make cycling easy, there was nary a skirt or Dutch bike in sight.

BMX bandits are alive and well in Petersburg: a cyclist in Moskovskaya Ploschad.

No, like so many 80s-90s trends, including the mullet and rollerblades, mountain bikes are hot in St. Petersburg. But given the condition of the roads and sidewalks (which are used regularly by cyclists there) this may be more of a practical choice than a fashionable one.

The only helmets in St. Petersburg

Which brings me to the explanation of this post’s title: the number of cyclists on the road grows exponentially after 10 pm or so, as the sun starts to set and the traffic — pedestrian and vehicular — dies down. That’s when the bikes come out. Unfortunately they are more difficult to dodge after a few glasses of vodka, but we managed.

The closest to cycle chic Russia got

On our 3:30 a.m. ride to the airport, we probably saw a dozen cyclists (too bad we were too exhausted to take pictures).

Rare sighting - a cyclist not on the sidewalk

I will close with photos of the two other hot Petersburg trends I mentioned — both of which were more numerous than bikes! 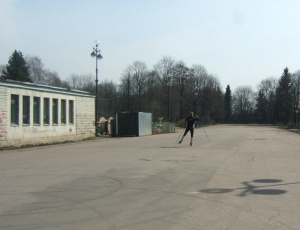 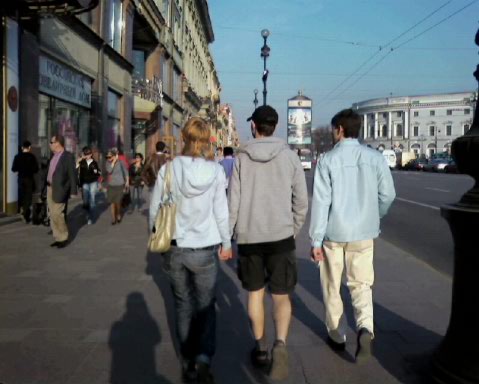 His and hers mullets on Nevsky -- though his was buried under the hooded sweatshirt.