Another beautiful spring day on bicycles. We enjoyed a few hours in the Lincoln Square neighborhood, visiting the bookstore, music store, Italian restaurant, coffee shop, and running store. Cycling there makes the whole day 100 times more fun, since it’s so much faster than driving or the el train, plus it’s impossible to find a car parking spot and the el is always sorta depressing. On bikes, the journey becomes part of the day, instead of a hassle to get through. 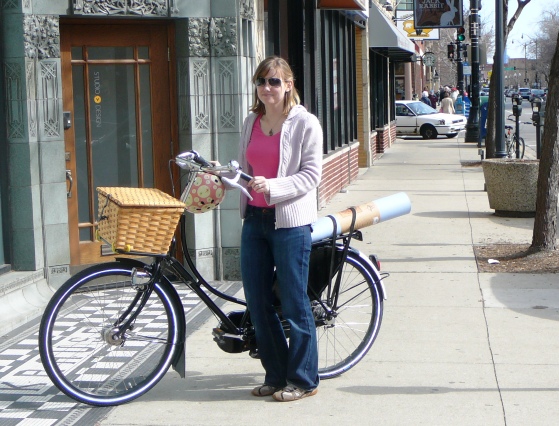 This morning I put the front rack and basket on my bike (it’s been off for a while to help combat the headwinds). The basket was stuffed full and the Oma handled like a charm. Thank goodness for those rear rack straps, which can hold pretty much anything, including my new yoga mat. The front rack is rated to carry 50 lbs and the rear rack 75 lbs, so I still have a long way to go before I run into cargo problems.

We popped into an Italian place for lunch. I was disappointed that no cafes had their outside seating set up yet, which is the truest sign that warm weather has arrived. To compensate, I sat by the window and got quite hot by the sun’s rays. 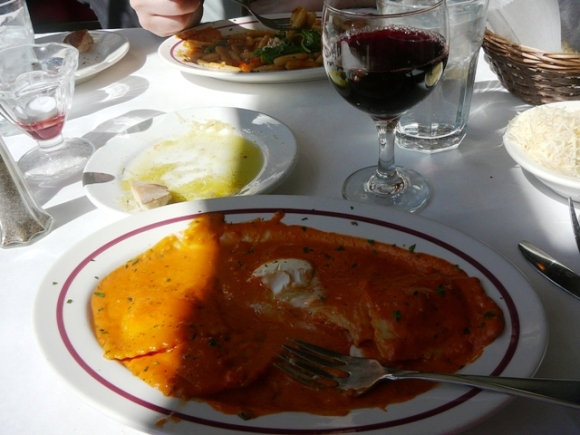 Doesn't everyone have wine with lunch?

Bikes of every manner were locked up all along the sidewalks. This one says “Bicycling Against Oil Wars.” I’ve seen a different bike with the same sign a few times before. Sure, one of the many reasons I cycle is against oil wars, but I’d rather stay positive and subtle in the bike lanes. It’s good that some people spread their message, though.

Here’s a lighter image. I looked to see what type of bike this was, but all it says is “PINK!” Fair enough. Later I saw a woman riding a different but very similar bike. Gotta love Chicago bikes. Notice in the background the sharrows of the marked shared lane. The wide open space on the right is not a bike lane, unfortunately, but street parking for cars. I think all the space Chicago gives for parked cars is crap and the city should eliminate all street parking on Lincoln Avenue, a major thoroughfare for cyclists, and use this space as a wide bike lane free from dooring danger – that would literally change my life and make cycling so much safer and more comfortable. I may as well wish for a purple unicorn, though.

On the way home we tootled around the neighborhood a bit, enjoying the beautiful weather and calm streets. Greg took me to see a dreamweaver made of bicycle parts that he ran by earlier in the week. Pretty cool. 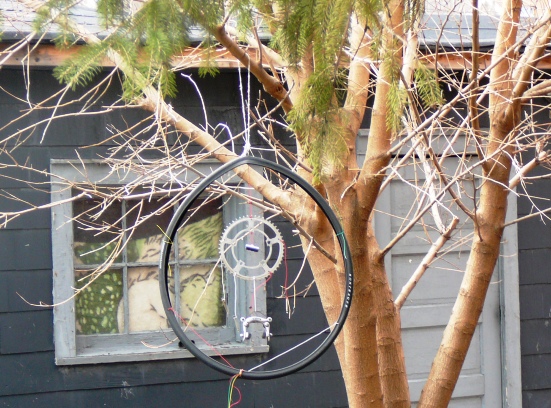 Finally, we ended the afternoon on the balcony. Prime city real estate here! This was our inaugural balcony hanging-out since last summer. I read Bust magazine, listened to my new Neko Case album, and drank Great Lakes beer until the sun fell behind the apartment building next door. Tra la la. 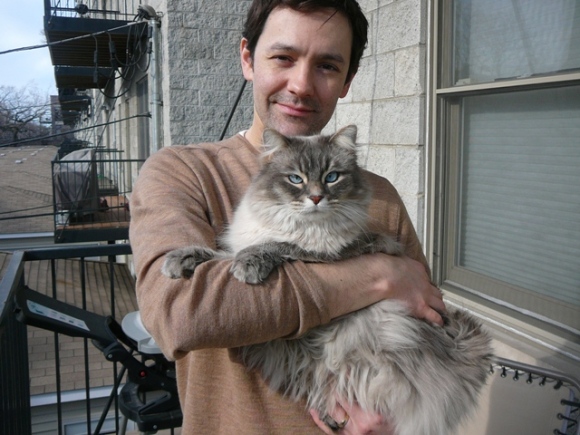 The cats enjoyed the outside time, too. (Teddy Bear is not very photogenic.)

UPS indicates that my Rivendell Betty Foy is in Chicago today, but Brown will not be delivering it until Monday – oh, the heartache! Expect so many pictures next week that you get tired of seeing the thing.

10 thoughts on “Saturday in Lincoln Square”