Lunch in Midtown, or Why Can’t We All Just Get Along?

Yesterday I rode my bike from the office to lunch for the first time (I don’t go out for lunch a lot, and when I do, it’s often within walking distance). A 1.7-mile ride isn’t far, and though temps were only in the high 30s it was nice to get out in the middle of the day. 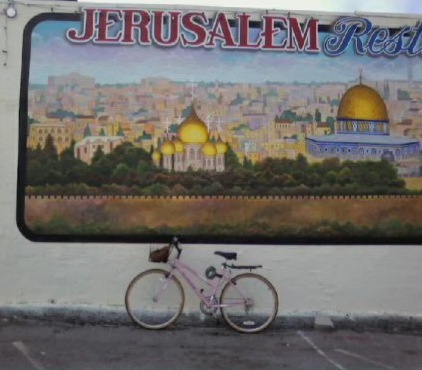 The restaurant* had such a great mural on the side that I had to take a picture. Unfortunately, they had no bike parking.

The best I could do. Pinkie didn't get towed.

The ride was through a busy part of town (down 24th, across West End, down Elliston onto Church, for those interested)  and I was the only cyclist I saw. Cars were  courteous and gave me lots of space, but I couldn’t help feeling like a curiosity. The ride was quick and I arrived in about the same amount of time as my friend who came by car.

On the way back I took 21st through Vandy and it was a different story. Just as many lights, just as much traffic, but drivers seemed impatient with me (probably because the lanes were barely wide enough to fit both a bike and a car, though there were two in each direction so they could have gone around). I heard some students talking about how I shouldn’t be on the road as they walked past me while I was at a red light. I got fed up with dirty looks and being ZOOMED around angrily and walked my bike for a couple of blocks at one point.

I do my best not to see cars and bikes as enemies, but rides like this make it difficult. I ride my  bike because I enjoy it, not to prove something, but sometimes I do feel like I am a stand-in for all cyclists as we try to stake a claim to just a small part of the city streets. Sharing the road is not a problem for me, whether I’m in my car or on my bike. I wish everyone felt the same. Unfortunately there are some roads better left untraveled by bike, and this is one of them.

*on a brighter note, the $7.99 lunch buffet was excellent. Highly recommend the lamb and rice, hummus and lentil soup.

5 thoughts on “Lunch in Midtown, or Why Can’t We All Just Get Along?”